This week, Greg discusses the AMA’s request for help to fight the upcoming FAA restrictions, the Anduril kamikaze Drone Interceptor, the DRL RacerAI drone, and the FAA TFR over the Balloon Festival.

Become a Part 107 commercial drone pilot with my test prep course. It has already helped over 3000 students successfully pass the test. Over 12 hours of content, hundreds of questions, lifetime access, get 25% off with this link.
https://pilotinstitute.com/course/part-107-remote-pilot/?coupon_code=YTNEWSUPDATE

Practice your drone flying skills with 50 drill maneuvers designed to make you a better pilot. 25% off with this link.
https://sso.teachable.com/secure/245841/checkout/1356037/drone-maneuvers-guide?coupon_code=YTNEWSUPDATE

Script/Links
AMA asking FAA to review altitude restrictions
The AMA is reaching out to the community for support of some new guidance from the FAA.
Currently, hobbyists operating at AMA sites can fly under the Letter of Agreement (no LAANC request required). These letters include altitudes above 400 feet.
New guidance from the FAA would limit the altitude to 400 feet in controlled airspace, and 700 to 1200 feet in Class G uncontrolled airspace.
No possibility to apply for waivers.
This would limit certain types of model aircraft such as turbine powered and thermal gliders (which require up to 2000 feet altitude).
The AMA argues it would actually make these model less safe since they need to operate at much higher altitude and flying them lower would increase risk.
The AMA has a long history of safety and no accidents so there’s no reason for this sudden change.
https://dronelife.com/2019/10/08/the-urgent-new-issue-facing-recreational-flyers-a-conversation-with-the-amas-tyler-dobbs/

Drone Interceptor that crashes into rogue drones
Anduril, a silicon valley startup, has released a drone intercepter (“The Interceptor”) that slams into rogue drone to disable them.
It is designed as a reusable platform.
The drone is capable of reaching 100 mph and using vision to lock onto targets.
While certain counter methods use jamming as a method, this is a different approach.
https://dronelife.com/2019/10/08/anduril-interceptor-counter-uas-system/

AI vs Pilot, who’s faster?
The Drone Racing League (DRL) is introducing the first ever autonomous racing drone.
The DRL RacerAI will debut on October 8 for a 4-race series.
The series will feature 9 identical RacerAI drones, no GPS, no data relay, no human intervention.
More than 400 teams from 80 countries fought for the coveted 9 seats.
The drone has 4 stereoscopic cameras that allows the AI to detect objects (twice the FOV of human pilots)
The end goal is to compete against human pilots

Stay away from balloons
The Balloon Fiesta is NOT a drone friendly location.
A TFR has been issued for the big balloon gathering in Albuquerque, NM. The event takes place from October 4th to 13th.
More detail about the TFR can be found under NOTAM number FDC 9/8221. https://tfr.faa.gov/save_pages/detail_9_8221.html
Flights are prohibited within 4NM up to 2700 feet from 5:30am to 12pm.
You can face civil penalties that exceed $30,000 and criminal prosecution.
https://www.faa.gov/news/updates/?newsId=94673

02:54
A new altitude test with my Syma quadcopter since fitting a 5db aerial. Similar …

02:31
Finally, I have come closer to my dream and completed my first long range …

4:43:53
Welcome aboard flight 2015 from McCarran Intl to Philadelphia Intl. Our flight time will …

01:10
Melaaha’s mission is to be the go-to source for drone business by providing professional … 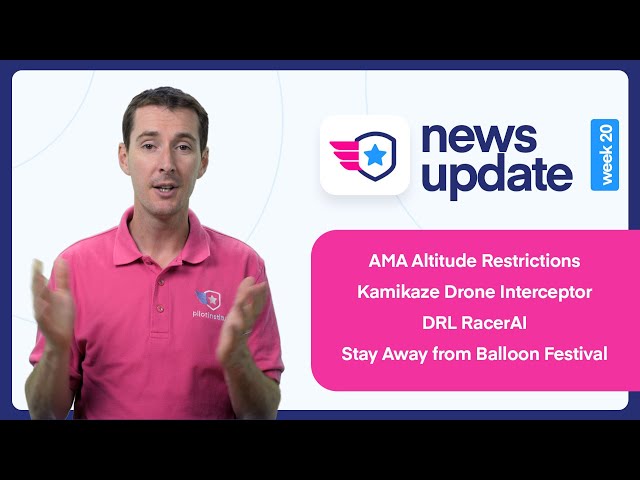