The war between Armenia & Azerbaijan which has seen extensive use of drones by Azerbaijan, has changed the perspective of drones in the military warfare. India which is facing threat from China is in dire need of combat and surveillance drones to thwart any misadventures along its border. The Chinese state media had also claimed earlier that Indian Army will not be able to parry an attack by large number of armed drones. At the same time China is arming Pakistan with 50 Wing Loong II armed drones, which it prophesied, would be a nightmare for Indian army in high-altitude areas as India’s military does not have the ability to respond to the new-age stand-off weapons.

Its the need of hour that India must have latest fleet of high tech surveillance and attack drones in its inventory. India’s quest to acquire high-end drones for military operations might come to an end as the Ministry of Defence and the Indian Air Force (IAF) have announced a new iDEX or Innovations for Defence Excellence project which is an ultra high altitude Indian-made drone called Infinity.
HAL have gained significant success in developing a solar-powered drone, called the Infinity. The unmanned drone warfare program is called CATS or the Combat Air Teaming System. HAL is developing this drone in partnership with Bengaluru-based startup Newspace Research and Technologies.

The project was first revealed in 2017 and since then it has made significant progress over the last few years and the drone could be available to Indian forces in three to five years.

Infinity will be capable of remaining in air for over 90 days and cruise at an altitude of more than 65,000 feet to monitor enemy targets. It is designed to be in the class of the Zephyr solar-electric stratospheric Unmanned Aerial System.

The drone is being developed as part of India’s Combat Air Teaming System or CATS, will also be able to relay live video to the ground station during operations.

The Infinity drone will have array of SOLAR cells to power it. The secondary batteries will get charged in daylight to power overnight flights.

The new drone will be equipped with a synthetic aperture radar for monitoring activity deep inside enemy territory. Using its advanced sensors, the drone will be able to coordinate with other Indian Drone system such as Warrior loyal wingman drone, ALFA-S swarm drones and Hunter missile.

Apart from military use, the drone can be also use its infra-red and imaging payload to provide services towards disaster management, smart cities and natural resource management.

05:16
Featuring Victor Krapalis with his FPV Racing Drone – he is an amazing pilot: …

01:23
Test of Xioami 4K drone at its maximum capped altitude of 500 metres

08:04
We have lift off! Here is a collection of the best drone fails you’ve … 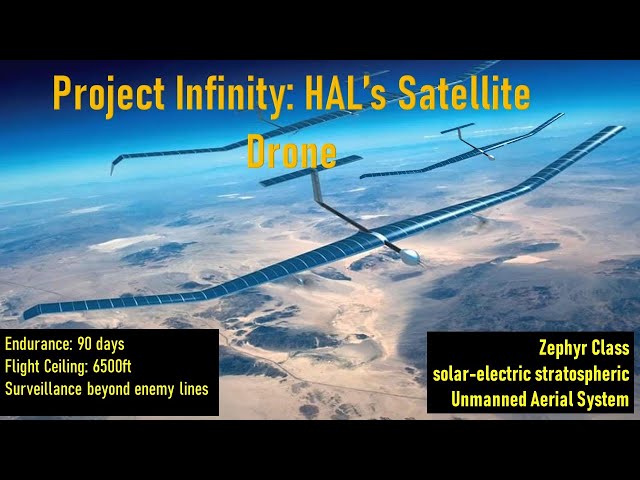