SHOULD YOU BUY IT?

IS IT WORTH IT?

Video brightness is all over the place and colors don’t look that great, but I think that asking for perfection from a ~$55 drone is a bit too much. For me the very fact that the video feed is stable, without lagging or dropped frames, is a miracle to be honest. Now if you ask me about the range, that is something that could have been better. I mean the 150ft range that the FPV signal has is standard for these 2.4Ghz wifi drones, I’m not singling H47 out. Even still feels very limiting. Maybe future models will implement better radios for better range.

Transmitter
JJRC H47 drone has an unusual transmitter. Single handed g-sensor powered transmitter isn’t something that you normally see on drones. Drones that have unusual transmitters, or no transmitters at all, like it is the case with JJRC H43WH, is a relatively recent trend. I wouldn’t necessarily call it a bad thing. It’s just innovation, trying new things. Figuring out the g-sensor controls didn’t take long. Check out the cheat sheet on the right for a quick visual “how to” of the g-sensor controls.

One joystick does exist on the transmitter. It is used for throttle (going up/down), and for changing yaw (rotating the drone left/right). G-sensor controls are used for changing the drone pitch (moving forward, backwards), and also for adjusting roll (moving the drone sideways left/right). Reading about g-sensor powered control might make you think it’s complicated, but it really isn’t. As soon as you grab the controller in your hand tilting it in order to control the drone becomes instinctive. It is a very intuitive way of controlling the drone.

You might have actually controlled a drone using a g-sensor if you ever used app control on a drone. They sometimes include g-sensor control, only in their case phones g-sensor is used for controlling the drone. H47 and Eachine E56 have the g-sensor in their controller. To sum up, transmitter works well, is very responsive and it will be an excellent conversation starter.

Battery
Battery on JJRC H47 has some good sides and also some bad sides. Let’s deal with the bad first, drone uses a special proprietary locking mechanism for the battery. It’s similar to what you find on laptops. What this means is that you can’t use existing two prong batteries as spares. Additional spare batteries have to be ordered from JJRC themselves. There are vendors on Amazon who sell the drone with additional battery packs. Next the battery life of this single battery isn’t that great. You’ll get 5 minutes, 7 minutes tops before having to charge the battery for over an hour. I guess this proprietary locking mechanism makes it easier to replace batteries, but it also forces you to buy a whole new set of batteries if you want to fly for half an hour at once. 🙁

Additional features
Let’s take a look at what kind of additional features JJRC H47 has to offer. Headless mode is available. I have to say that it works great in combination with the g-sensor controller. In headless mode you don’t have to adjust yaw, just tilt transmitter to change pitch/roll and enjoy the ride.

Altitude hold uses a barometer to hold up the drone at a set height, without you having to fiddle with the throttle. Camera has a beauty mode, but I don’t notice that much of a difference with it active, to be honest.

Within the FPV app control you’ll find lots of buttons to tap. Two other that I think that are worth a mention would be one-key landing button and 3D flips and rolls button. One key landing obviously automatically lands the drone for you, so you don’t have to go through the hassle of landing it yourself.

Tricks work great, and are a lot of fun. Lastly there’s also flight planning, speed control and gyro stabilization (one button calibration on the transmitter).

Flying experience
While flying the drone with both the g-sensor powered transmitter and the app control, everything went OK. Some battery overpowering is present. When you push the motors too hard drone will lose altitude, but it’s nowhere near to the kind of extent that it was happening on Eachine E57. G-sensor transmitter might not be as responsive as a joystick would be, but when you take its price into account, H47 offers a very pleasurable flying experience.

Heck Yeah…… Definitely worth the money!!!

This race was an incredible moment because it focuses a lot of fast pilots. … 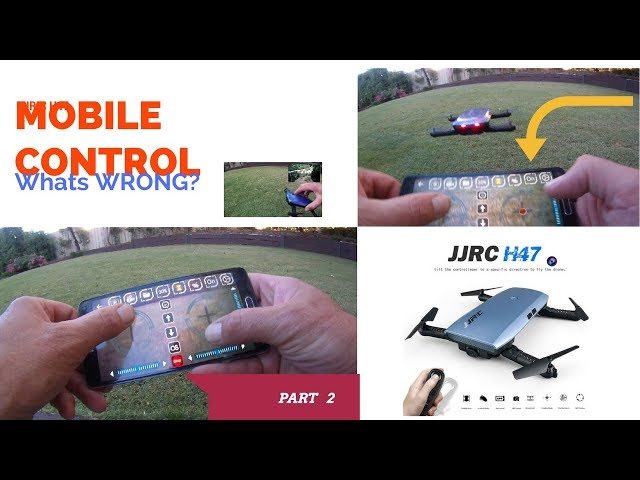