HQ5x4x3 V1S PC:
Best for smaller lower torque motors (2204/5), aggressive acro, light quads. They introduce a lot of noise to the frame resulting in a unsettled feeling through D gain, which you can hear in the vid. Not overly fast. Very forgiving in a crash. Very light! 60-70A draw.

HQ5x4x4 V1S PC:
As above but a bit more demanding, faster acceleration, sharper cornering, occasionally deflect at speed. Same noise issue as above. Light for a quad blade. 70-80A draw.

DAL T5045 v2:
Buttery smooth, very fast, good acceleration but quite demanding, drawing 90-100A. Don’t brake in a crash but do bend and don’t fly as well once damaged/straightened. Very little PWO with these. A lot of the weight is towards the tip so the least sharp response of the group. Similar weight to the V1S quad blades.

RaceKraft 5051:
First time out with these and wow. Relentless acceleration yet nice pickup from low speed. Very demanding dragging the R-line down to 13v. Very little frame noise despite being PC and tough because they’re PC. Just about as smooth as the DAL with better response, despite being even heavier (most of the weight is towards the root of the blade). Very very nice. Not done a load test but probably 110A+. Oh and they look badass!

The lesson to be learned here is; if you want speed, pitch is king, but you need a setup that can cope.

00:44
The other day I was talking to someone on YouTube about the differences between …

04:52
Today I ramble about the new Hobbywing 2207 racepro motors, Hobbywing is one of … 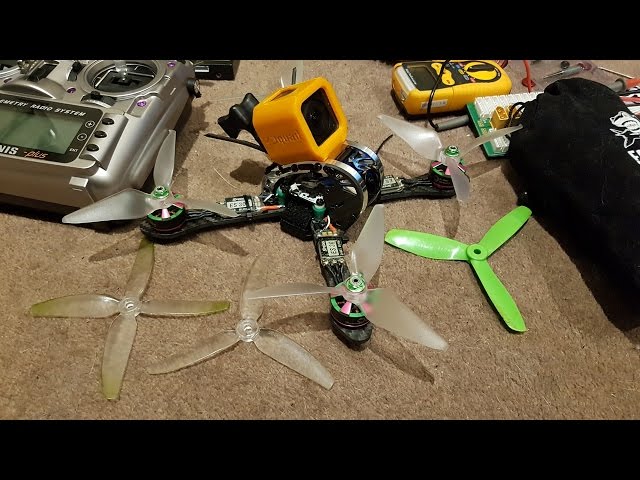