Vlog style run through a day’s racing at Round 3 of this years MMRC Drone racing.

I’ve captured all the races Thomas did in this round and hopefully it will allow you to experience what a days racing is actually like. Keep in mind I’m also racing and spotting so it really limits what I can capture.

So at the MMRC Meets we have four divisions, C, B, A and Superclass, in this video I capture all of Thomas’ Superclass races along with one of Nicole’s (HarleyQueenFPV our only female pilot) races. It’s kind of interesting as you get to experience what it’s like for both someone starting out who’s relatively new to the hobby, through to some of the faster pilots who’ve been racing for a while now.

It’s been an interesting year for Thomas as he’s started his final year of High School and as such the workload has been a lot higher than he was expecting it to be. As a result of the workload, he hasn’t been flying much at all. In fact in the lead up to this race, he hadn’t flown all week. It’s kept him very much on edge because he wants to do well but doesn’t feel like he’s getting the stick time he needs.

Having said that he did well at this race meet and managed to get through to the final and have a great day with great people.

At the end of the video, I’ve included the complete results for the day. Just pause the video to see the final results. HarleyQueen FPV was in C division, I was in A Division as BMSweb and Thomas was in Superclass as BMSThomas

02:53
Had a lovely time at an LOS event in Ahmedabad. Thanks alot everyone for …
0

This little FPV drone should be an excellent learn to fly quadcopter for beginners. … 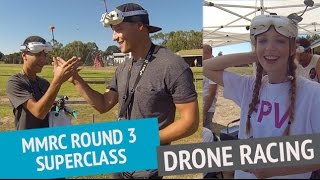