Get ready for a recap of Mega Drone X 2.0, Flitefest South, and Quadtoberfest! All these stories, and more, on the next exciting episode of MultiGP News.

MultiGP Rundown
The MultiGP Rundown cover some of the “Current Events” on the world of Drone Sports. From races, to tech, the Rundown brings you the cutting edge of our sport!

Flitefest South
In 2017 we have seen an expansion of the highly popular FliteFest fun-fly events, hosted by Flite Test. FliteFest South was this past weekend, and the MultiGP Team was there to run the FPV Flight Line. Stay tuned to get a full recap of this highly successful “Family Reunion of Flight”.

When the two biggest names in Drone Sports come together you know something monumental is going to happen.

Today is that day.

This is news that affects every single MultiGP pilot in the world. Having the two most powerful Drone Sports organizations working together means more recognition worldwide for MultiGP and its Pilots, and creates a unity between the DRL and MultiGP that will only grow the sport faster. This partnership also means that a MultiGP branded track will be on the DRL Simulator (coming next year), and a link to the MultiGP website will be on the DRL site, allowing even more people to discover and become involved with MultiGP.

The DRL is extending some MultiGP Exclusive benefits and prizes to the 2018 Swatch DRL Tryouts as well. Exclusive benefits to MultiGP pilots who excel in the Tryouts include:
The top 20 MultiGP Pilots during the Tryouts will receive MultiGP & DRL branded Start/Finish gates for their local chapters and local races
The top 5 MultiGP Pilots on the leaderboard receive a Racer3 (valued at $1,000 each.)
The top MultiGP Pilot on the leaderboard will be invited to the live eSports tournament (February 2018). This MultiGP Pilot will have the opportunity to compete and win a $75k contract and ﬂy in the 2018 DRL season

Stay tuned to MultiGP, DRL, and MultiGP News all throughout the 2018 Swatch DRL Tryouts to stay up to date on the leaderboard and the rising MultiGP Pilots in the Tryouts. Will YOU be that lucky Pilot? You will only find out if you compete!

Mega Drone X 2.0
Mega Drone X 2.0 concluded earlier this month, and this race delivered the action! Over 100 Drone Racers and spectators descended into the depths of the Kentucky caves for this second annual event. The MultiGP News Team was on site to cover the action. You will not want to miss this epic recap. Tune in to find out won this subterranean slugfest!

Crashes of the Week
Are you ready to take pleasure from someone else’s pain? Well then the Crashes of The Week are for you! Get ready for a compilation of carnage as we watch quads come apart.

Special thanks to
Nick Roosen, Andy Marjama, Chance Hartman for the photos/videos they provided on this episode of MGP News.

19:05
The Community Spotlight is back! What better way to finish off the year than …
0

09:34
It was developed using Gazebo, Simulink and Thingspeak IoTPlatform To compensate the time delay …
0

00:00
Online only. Now’s your chance to become a DRL pilot without having to travel. …
0 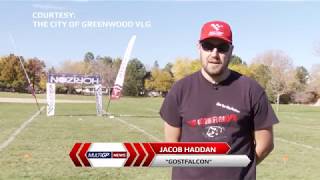