Dirt Bikes ridden by two pros being chased by Mini Quads 😀 This is the Raw Version.

I posted some Raw footage on our FB and Instagram which was really well received. The video previous to this was edited with Music etc, but had a number of people just want to see the raw footage towards the end of the shoot pretty much as is. Well this is it. I used the start of the second last flight and 90% of the last flight.

Firstly a big shout out to SnakeFPV for inviting us to the shoot and the fact that no one else from the team could make it. It was short notice and the day started with us having a fly at our local park with Snake and it was blast.

This was followed by flying the local dirt bike track chasing Cheyne Boyd & Jack Simpson, both insane riders. The Video team from Lensman / Flightcraft UAV had specific shots they needed and we didn’t get many takes until the end, but by that stage the lighting was pretty much gone, but still had a total blast. This is the low light footage and the GoPro’s ISO was set incorrectly for the lack of light.

If you want to see the offical Shift MX video here is the link:
https://www.youtube.com/watch?v=Y4nXj8uiSog

NOTE: No Motor Cross riders were harmed in this video!

Hands down the best racing I’ve had so far. Pilot’s view edit of the …

03:37
testing my new setup and also laughing crashed and happy!
0 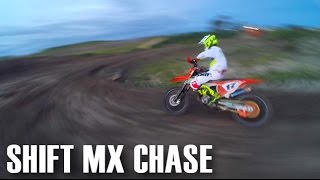