The companion computer is programmed to listen for a command to launch, then execute a predetermined flight plan. In this case, the flight plan just commands a waypoint (37.5261575° Latitude, -77.43310322° Longitude, 4 meters altitude), then commands a return to the launch position. Shortly before the recording started, the launch command was sent via smartphone from the modem vendor’s web interface. I was standing right in front of the quadcopter when I sent the launch command, but the launch command could have been sent from anywhere on Earth and the flight would have been executed the exact same way.

During the flight, the companion computer sent two status updates, which could be read on the modem vendor’s web interface. The first update showed that the companion computer successfully issued a waypoint command and also included current quadcopter telemetry. The telemetry showed current quadcopter position, current altitude (in a global reference frame), current altitude (relative to takeoff position), current heading, and current groundspeed. The second update showed that the quadcopter was returning to the launch position and also showed current position and altitude (in a global reference frame). When the return started, the quadcopter’s Latitude/Longitude was within 0.5 meters from the commanded waypoint’s Latitude/Longitude. The “Approx Lat/Lng” region shown in each map is the Iridium satellites’ estimate of the origin of that transmission. Not completely accurate, but a decent estimate from doppler shift calculations.

00:00
Simulator Drone Racing event which is tributed to MA6 event that was cancelled due … 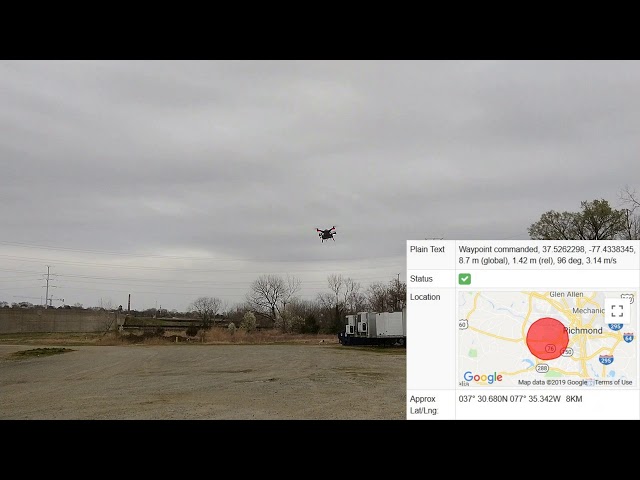