Here is our inaugural YouTube production filmed over the course of 5 hours by a great team consisting of our beautiful model Ashleigh (Instagram – @ashleighmlb), Barry and his fantastic Porsche 911 4s and Perspective Media’s own remote pilots James and Jack.

All the aerial and ground-based photography was taken by Perspective Media Ltd. This was done using a DJI Mavic Mini, a DJI Phantom 4 Pro V2.0, an Inflight DC5 with DJI digital FPV system sporting a GoPro HERO8 and a DJI Osmo 3 with iPhone 11 Pro which was used for the static ground shots. The on-road shots were taken between locations with the GoPro HERO8.

There will be a making-of video coming soon in which we discuss the pros and cons of the equipment used in the shoot, so if you are interested in the way it was shot hit the like and subscribe button!

The Porsche is a 911 991.1 4s with a very rare factory fitted Aero Cup Sport body kit. It was lowered and received laser race-prep geometry which was done by Barry at Brooklands Kent Ltd www.brooklandskent.co.uk and the graphics were courtesy of Tom and the team at FXUK www.fxuk.net

A special thank you to Dave and Lesa for allowing us to use their beautiful location and to Nick Rice for the awesome music.
https://soundcloud.com/nickrice

We got an amazing opportunity last weekend. After getting full permission from the track … 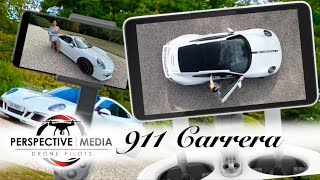