Western Australia has no shortage of waves. Randomly check the forecast and it seems like there’s always a purplish and reddish blob hovering below pumping Southwest swell to the region. However, no matter how wave-rich West Oz is, it has its fickle spots just like any other coastline. But when Tropical Cyclone Marcus took a deviant turn Southward, it sent swell at just the right angle to awaken many of West Oz’s long-dormant waves.

One of those waves was the shallow, sand-bottomed, freight train of a right-hander pictured above. The spot reportedly hadn’t broken in seven years. Brendan Foster was on hand to document Jack Robinson, Dino Adrian, Shanan Worrell, Jay Davies and more race the dredging cylinders. 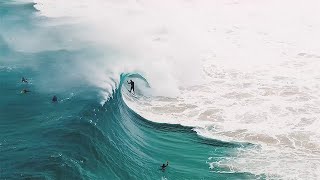