General John Murray, head of Army Futures Command, told a webinar audience at the Center for Strategic & International Studies that humans may not be able to fight swarms of enemy drones, and that the rules governing human control over artificial intelligence might need to be relaxed.”When you are defending against a drone swarm, a human may be required to make that first decision, but I am just not sure any human can keep up,” said Murray. “How much human involvement do you actually need when you are [making] nonlethal decisions from a human standpoint?”This indicates a new interpretation of the Pentagon’s rules on the use of autonomous weapons. These require meaningful human control over any lethal system, though that may be in a supervisory role rather than direct control – termed ‘human-on-the-loop’ rather than ‘human-in-the-loop.’Murray said that Pentagon leaders need to lead a discussion on how much human control of AI is needed to be safe but still effective, especially in the context of countering new threats such as drone swarms. Such swarms are likely to synchronize their attacks so the assault comes in all directions at once, with the aim over overwhelming air defenses. Military swarms of a few hundred drones have already been demonstrated, in future we are likely to see swarms of thousands, or more. One U. S. Navy project envisages having to counter up to a million drones at once. The U. S. Army is spending a billion dollars on new air defense vehicles known as IM-SHORAD with cannon, two types of missile, jammers, and future options of laser and interceptor drones. Using the right weapon against the right target at the right time will be vital. Faced with large numbers of incoming threats, many of which may be decoys, human gunners are likely to be overtaxed. Murray said that the Army’s standard test involving flashcard identification requires an 80% pass rate. During the recent Project Convergence exercise, artificial intelligence software boosted this to 98% or 99%, according to Murray. This is not the first time that the Army Future Command has suggested that humans on their own may be outclassed. In a briefing on the DARPA-Army program called SESU (System-of-Systems Enhanced Small Unit), which teamed infantry with a mix of drones and ground robots, scientists noted that the human operators kept wanting to interfere with the robots’ actions. Attempts to micromanage the machines degraded their performance.“If you have to transmit an image of the target, let the human look at it, and wait for the human to hit the “fire” button, that is an eternity at machine speed,” said one scientist, speaking on condition of anonymity. “If we slow the AI to human speed …we’re going to lose.”AI is in the ascendant.

All data is taken from the source: http://forbes.com
Article Link: https://www.forbes.com/sites/davidhambling/2021/01/27/drone-swarms-are-getting-too-fast-for-humans-too-fight-us-general-warns/

01:00
A quick demonstration of the arm transformation feature for the DiY 3D Printed DJI …

MultiGP Drone Racing has some of the most dedicated drone enthusiasts. Some dedicate their …

09:30
April 27th 2019 was the season opener of KwadsRUs MultiGP Chapter located in Vancouver, … 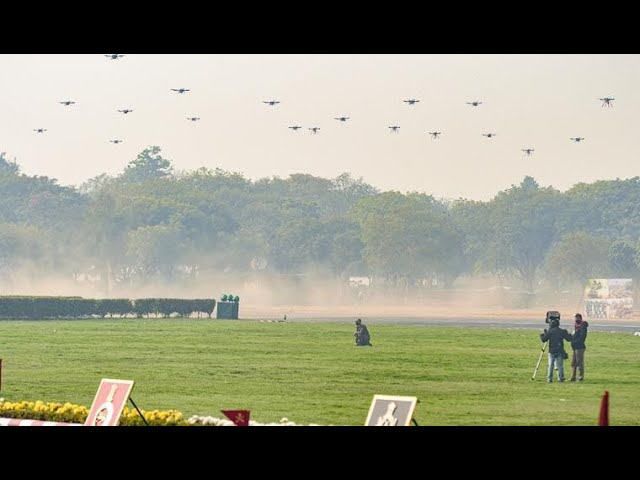