The Fighter 130 is another nicely performing Full Speed RC product. Good power and speed, even with a 2S 550mAh 50C Gaoneng battery. So it invites to be flown as fast as possible.

Almost crashed during this flight, after attempting a half flip, and level out with a half roll. Half roll became 3/4 of a roll, so ended up dropping rapidly. Due to having plenty of “reserve-power”and some luck, I got it leveled just in time to pull out off this tumble.

One thing needs some attention maybe, the FPV signal doesn’t have as much range and stability as I’d like to see on something that can fly this fast.

00:54
Feeling like I needed something fun to film I headed out to the Motocross …
0 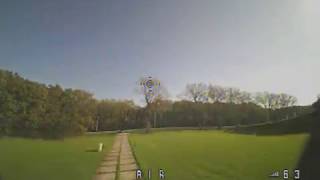