A senior at the Princeton International School of Mathematics and Science is now in the Guiness Book of World Records for the “Fastest 100m Ascent By A Quadcopter”. Zechen (Peter) Wei set the record on October 25. His drone climbed to 100 meters, or about 328 feet, in just 2.732 seconds. The record was previously held by German engineer, Dirk Brunner, who in 2016 built a drone that accomplished the climb in 3.871 seconds. Wei’s record is the culmination of a two-year research program at PRISMS. He created countless CAD models, conducted simulations and eventually produced an optimized drone for the attempt. The FAA announced last week that they have selected 12 organizations, including AMA, to make recommendations for the administration of the upcoming recreational knowledge and safety test. In September, AMA submitted a request for information (RFI) to show interest in becoming an administrator of the test. The knowledge and safety test is one of the eight statutory requirements found in the Exception for Limited Recreational Operations of Unmanned Aircraft to operate as a recreational flyer in the NAS. There has been a lot of talk about autonomous drones that has even filtered down into drone racing. But when it came to a head-to-head matchup between a human pilot and a programmed drone … the human won the day. The race was organized by the Drone Racing League in partnership with Lockheed Martin. DRL wanted to be the first to pit its new AI racing drones against a human competitor. The drone pilot was Gabriel Kocher from Switzerland. The AI drone was Team MAVLab, which had won LMC’s $1 million prize for being the fastest AI-controlled drone around the race course. All this — and MORE in today’s episode of the AMA Drone Report!!!

Get Comprehensive, Real-Time, 24/7 coverage of the latest aviation and aerospace stories anytime, at aero-news.net. And be sure to join us again next week for the next edition of “AMA Drone Report” here on Aero-TV. Thanks for watching. See you, again, tomorrow!

05:16
Featuring Victor Krapalis with his FPV Racing Drone – he is an amazing pilot: …
0 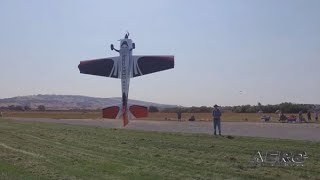